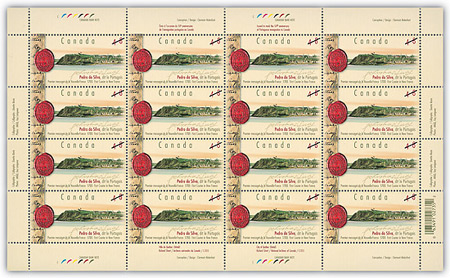 In the 15th and 16th centuries, Portugal brought “new world” to the world. Many Portuguese explorers, including Bartolomeu Dias, Vasco da Gama and Gaspar Corte Real discovered lands that were completely unknown to Europeans, and it was on one of these expeditions that Pedro da Silva “dit le Portugais” came to reside in Canada. Pedro Da Silva is credited as being the first ofﬁcially-commissioned Courier of New France. On June 6th, 2003, Canada Post honoured Pedro da Silva and the 50th Anniversary of the official arrival of the first Portuguese Immigrants with a 48¢ domestic commemorative stamp designed by artist Clermont Malenfant. King Henry, “the Navigator”, established a navigation school in Sagres, Algarve, from which emerged great explorers who discovered sea routes to the indies, South America, North America and Africa. It is believed that Pedro da Silva, given his experience and maritime knowledge, may have studied at the School or Sagres.

Little is known of the life of Pedro da Silva, except that he was baptized in the St. Julian Church in Lisbon, Portugal and that he left the country around I673. In 1677, Pedro da Silva, also known as Pierre da Sylva, married and he and his wife raised I4 children. According to a I681 census, da Silva moved to Beauport, Quebec, where he worked as a common post carrier. Later he moved to Sault-au-mattlot in Quebec City, and became involved with shipping goods. His proximity to the St Lawrence River gave Pedro da Silva the opportunity to exchange services with ships carrying goods to Quebec City and the entire colony.

Pedro earned a reputation as an honest worker in transporting goods, packages and letters, offering his services in all seasons, even in the harshest of conditions.

Documentation from the time shows that in July of 1693, Pedro da Silva received 20 Sols (Corresponding to the British pound) to take a package of letter from Montréal to Quebec City. On December 23rd, 1705, he received a letter from the commission signed by Jaecques Raudot, Independant of New France, declaring him as the “FIRST COURIER” in Canada.

Pedro da Silva also received permission to carry letters to and from private persons, as he was observant, punctual, diligent and loyal, all of which allowed him the privilege of being the “regular messenger“ of goods and also official mail for the Governor General of New France between Quebec City and Trois-Rivieres or Montreal.